Found another biological cousin. He says his father was named Marvin. Maybe Marvin and my biological father are brothers? “Enquiring” minds want to know! I have no information about any of my bio-father’s siblings.

The 23 and Me site has all kinds of interesting tidbits. They have a huge collection of data from customers who voluntarily answer their questionnaire. I don’t doubt for an instant that selling anonymous genetic and questionnaire data to researchers is their major profit center. I don’t mind it a bit.

Occasionally criminals have been brought to justice because people who were willing to share their genetic info turned out to be related to the perp and assisted law enforcement in identifying them. 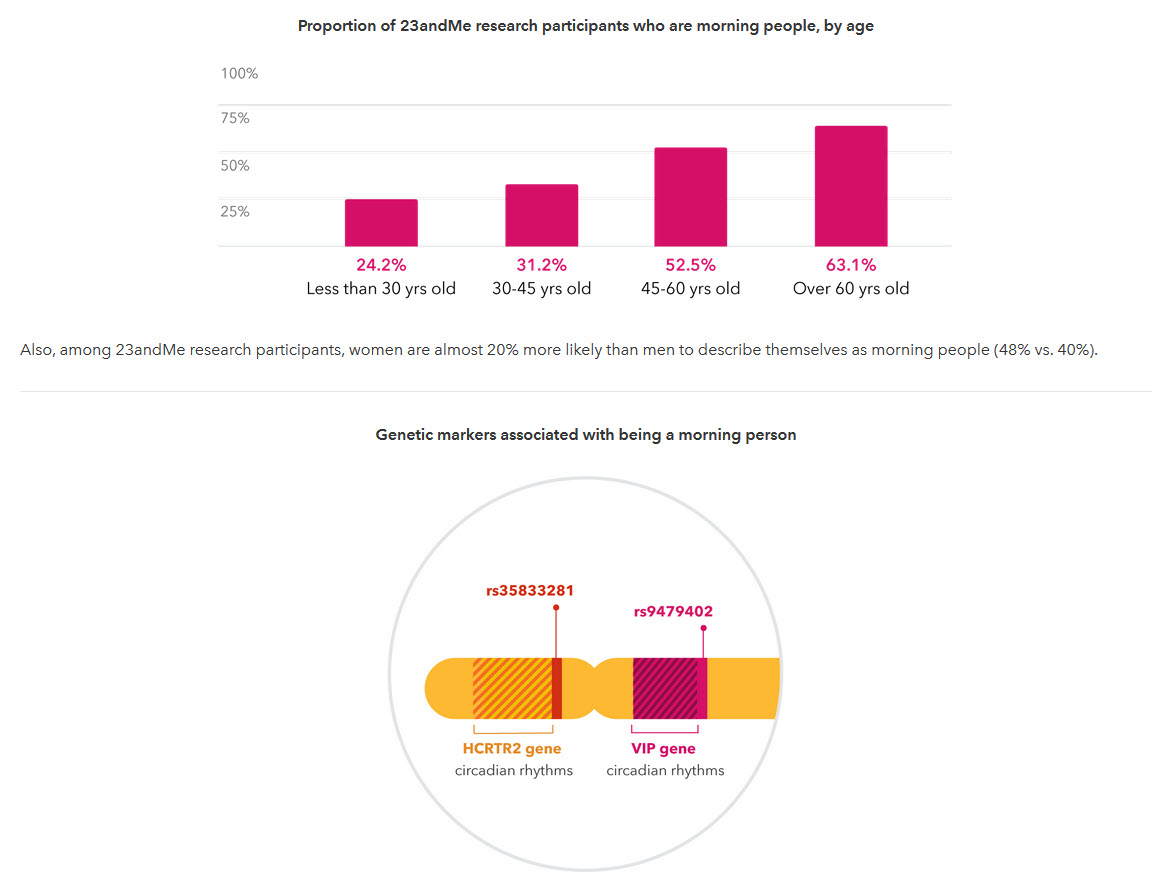 Amazing. Being a morning person or a night person has a major genetic component. It also increases in frequency with age. 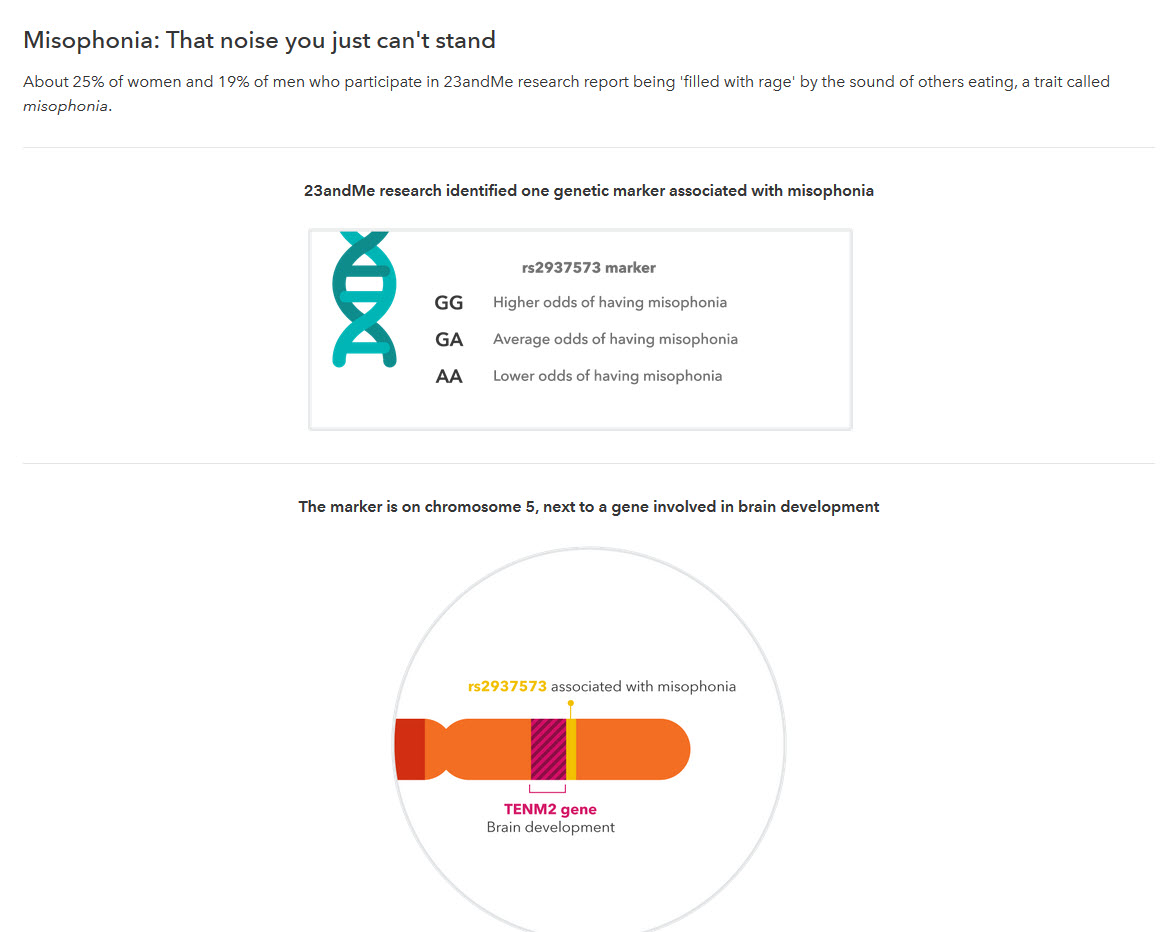 My son has this to a certain degree. There are a few sounds I cannot bear to listen to. Nobody else I know has it. It seems there is a possible genetic component. 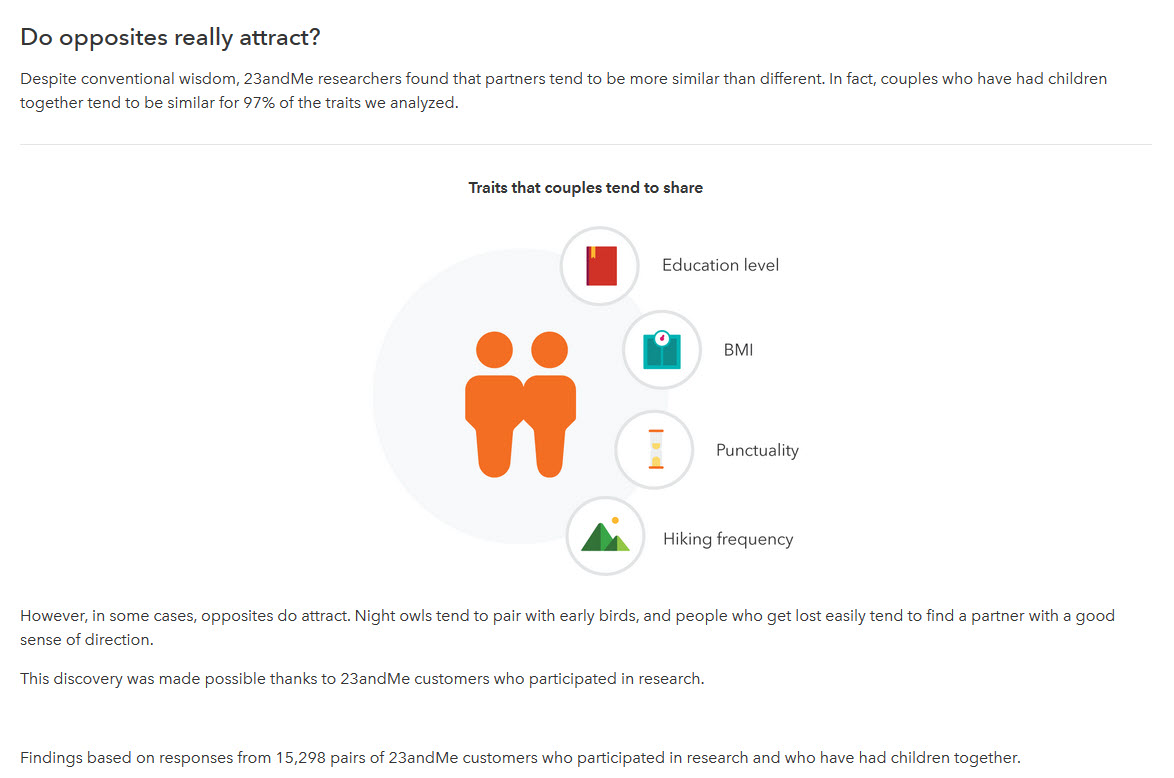 In most cases, like attracts like. Yet in some traits, we tend to pick partners who are opposites.

Depression is more common in European descent. Less common in east Asian. I could as easily look it up by age or by bio-sex but this is more interesting.

Once again those pesky east Asians come out on top in mental health for PTSD. 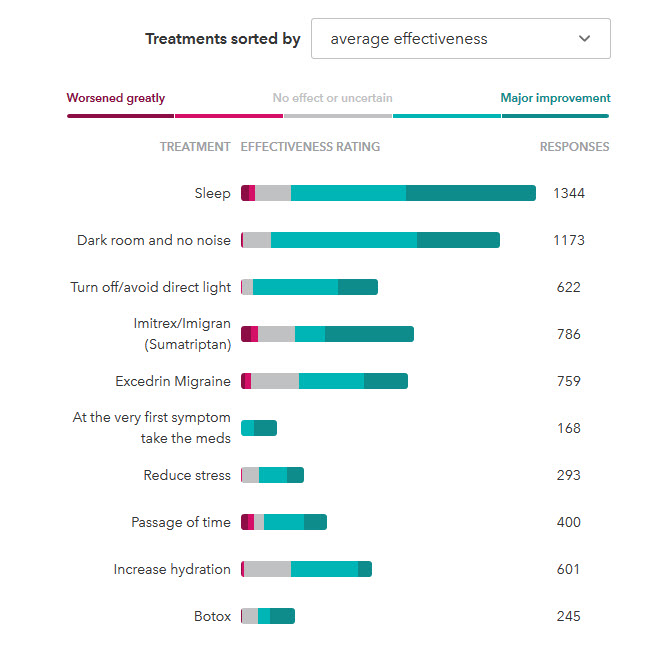 I’ve always known that a good long sleep fixed it for me. A dark room and no noise also help it improve. At least for me, no drug except Imitrex has ever had any effect – unless they help me get to sleep. Notice that for many treatments there are some who report adverse results. 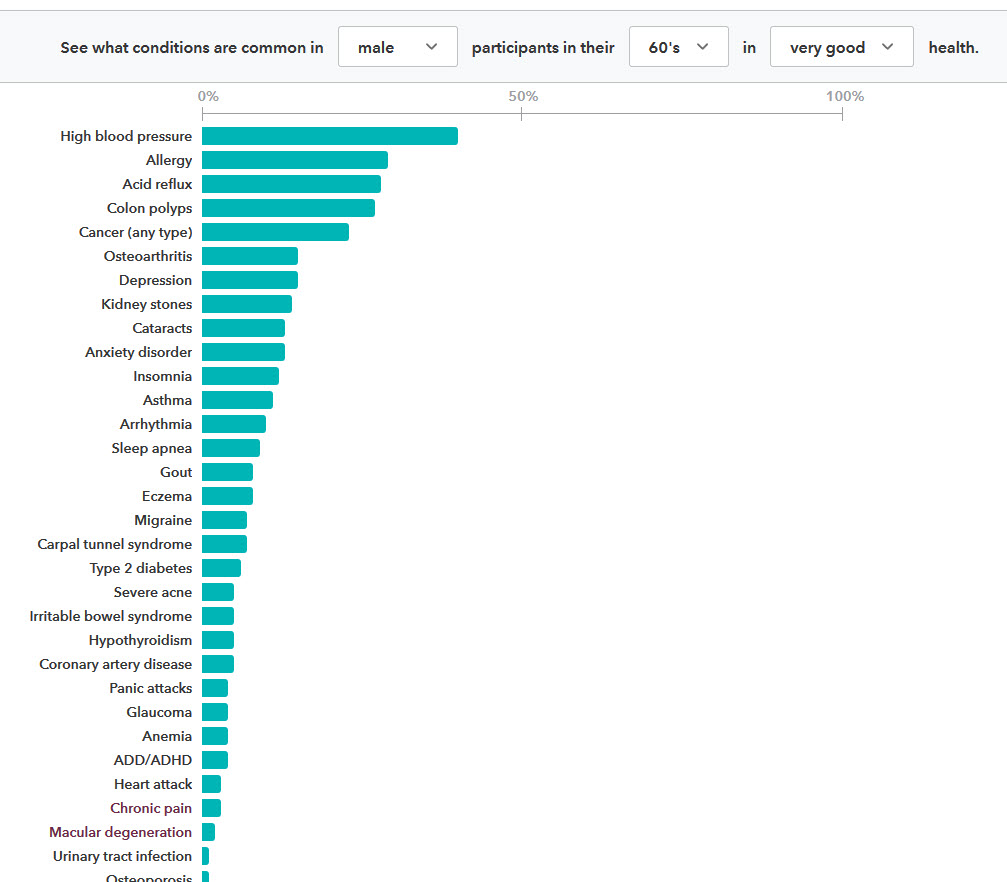 So far so good.

I don’t have high blood pressure. No major allergies. Acid reflux happens but is rare. No polyps. No cancer. Big time osteoarthritis, probably far worse than average. I finally kicked my last bouts of depression when I quit work. Some small kidney stones but nothing the doctor is concerned about. Minor cataracts but not affecting my vision in a critical way. No insomnia, asthma, arrhythmia, sleep apnea, gout, and only small intermittent patches of eczema. Migraines seem to have (mostly) gone away. No carpal tunnel, diabetes of any type, acne, IBS, heart disease, panic attacks, glaucoma or anemia. My ADD continues uninterrupted from childhood. No heart attack, my chronic pain is from my arthritis. No macular degeneration.

However, I am now pre-diabetic. I’ve had UTI infections in the past but none recently. I got checked for osteoporosis and while the medical imaging people said I needed to be concerned my doctor says I’m ok. Most of my life I was a stranger to anxiety but I find as I get older I am becoming acquainted with it. For an old fart, I’m doing pretty good. 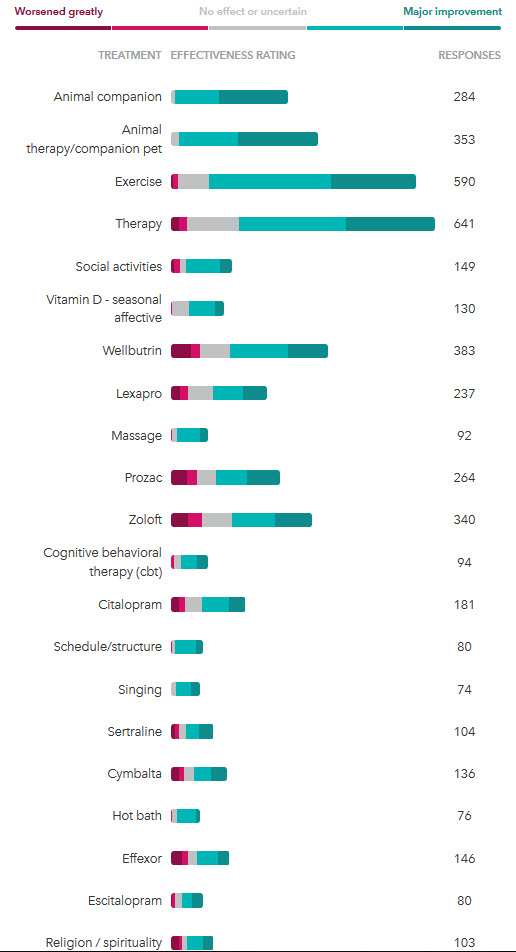 Now we are getting into the important stuff.

This chart shows the effectiveness of various treatments for depression. The most effective and having no reported negative adverse outcomes is animal companionship. No surprise here. My dogs and cats have always been my goto “medication” in times of sadness. (When I was very young there was a horse as well.)

Next in effectiveness is exercise but a small number of people reported exercising made it worse. Then came therapy which was the most commonly reported. Note that a few people reported that therapy made things worse.

A lot of people using drugs. If you add them all together into one group, far more people use drugs than therapy. Cymbalta, Sertaline, Citalopram, Zoloft, Prozac, Lexapro, Wellbutrin and others combined amount to over 1700 respondents, vs. 641 people reporting using therapy. Even if every person on therapy was using drugs (and a few of those using multiple drugs) that’s still a very large number of people doing drugs and not therapy.

It is simply this: Pills are cheaper than therapy. So we use pills even though it is way down the list of what people say they find effective and have a much higher chance of adverse results. I am not surprised they didn’t ask about “street” drugs

Nobody bothered to track being naked in nature. Sigh! I suspect it would be VERY effective with few or no adverse results – unless you encountered a hostile person. Or didn’t apply a sunscreen.

Also note that singing, while used by few, had no adverse reactions reported. (A fair percentage of people reported no effect either way. Must not be singing the right songs.) I love to sing when I’m down. 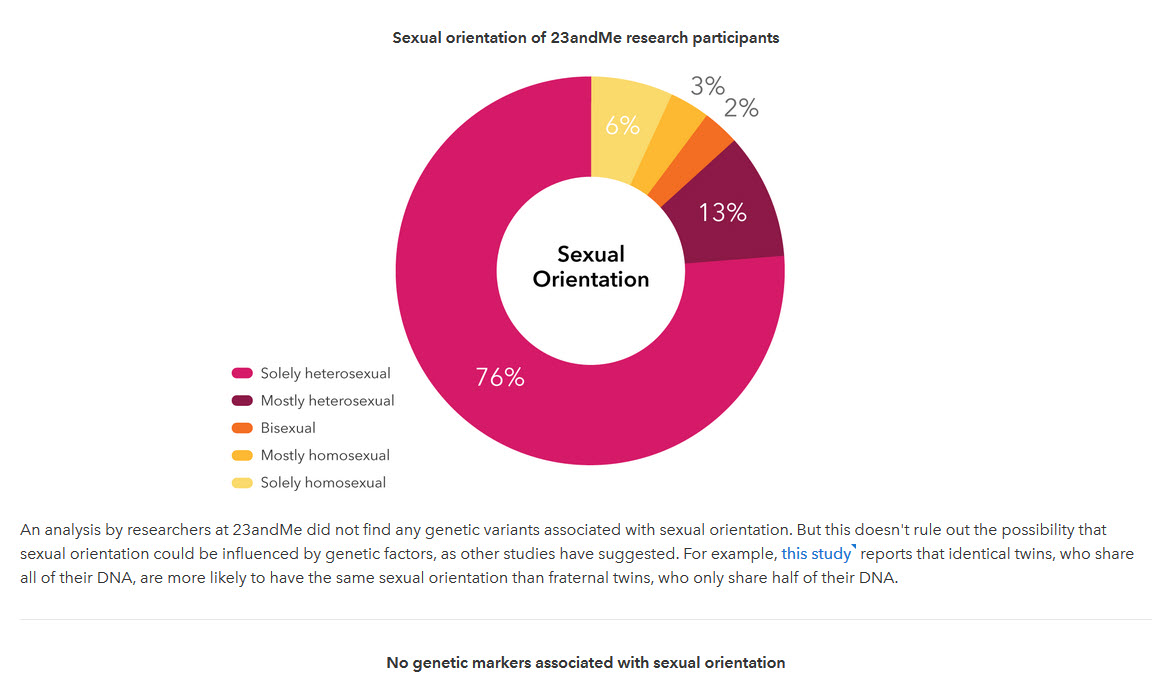 This is the grand finale. We don’t know what genetic markers might be associated with being gay. Twin studies have shown a clear genetic factor. We just don’t know which genes to look at. Obviously, 23 and Me can’t test for them. (If they could it might be controversial to do so.)

There are interesting – and conflicting – discoveries being made in the genetics of autism. While 23 and Me doesn’t test for them (probably too controversial) it does seem from family and twin studies to be at least partially a heritable trait.