When I was a child, I read about hippies on drugs staring at the sun until they were blind or jumping off buildings thinking they could fly. Not cool. But I chalked the stories up as newsworthy only because of their rarity. Most were eventually shown to be false. I also read about people using psychedelics like acid and peyote to discover themselves and have visions. That part sounded pretty neat.

Fast forward to high school, 1970. I was in a rural small town in Michigan. The drugs were there but not in large quantities. You pretty much had to be in the “cool” crowd to get them. I was totally uncool.

Fast forward again to senior year in high school. My first experience with pot was with a boy who was bi and interested in me. I couldn’t care less about his sexual orientation, I just wanted him as a rare friend. First time I tried, nothing but scorched lungs and coughing.

Second time around, we were listening to Pink Floyd, Dark Side of the Moon. Totally wasted this time. Everything was shimmering orange and green. My entire body felt electric. Clothes fell off. Things came up. We had a lot of fun. (You probably don’t want the sordid details.) But alas! This wasn’t an episode of Given.

Imagine it is the first time you’ve ever been high and it is epic!
And you are listening to this…

I’m really am straight but there was never any regret. A couple hours later we’re down from the pot and getting dressed. I go home. The next day, he’s friendly but not a friend.  No encore performances here. I’m lost and baffled. But then that was my natural state.

Off to university… We’ll skip the depression, the suicidal thoughts, and the lovers. Other posts.

My dorm was saturated with drugs. Some of my fellow inhabitants had added gaskets and duct tape to their dorm room doors to keep the scent of the marijuana out of the hallways. Fixing a hole, so to speak. We were also awash in liquor, mostly Jack Daniels.

I’m fixing a hole where the rain gets in
And stops my mind from wandering
Where it will go.

Somehow I missed all the bad stuff. I did a lot of tripping on acid, pot, mushrooms, and later ecstasy. Self-medication, self-discovery and pure hedonism. People warned me about bad trips but I found myself wondering how that could happen since I never had anything but a good trip. I joked about wishing I could have a flashback because it would save me money.

I snorted a fair amount of speed but I didn’t get addicted. I may have been naturally resistant to such things. Or maybe being both unpopular and poor, my access was too restricted to become dependent. Opiates were completely uninteresting. Cocaine didn’t do much for me either.

Others were not so lucky. I once knew a beautiful girl with a sweet personality who destroyed herself on meth. Became anorexic, slurred her speech, lost about 30 points of IQ and became paranoid. God only knows the damage to her internal organs. Another bullet to be dodged. 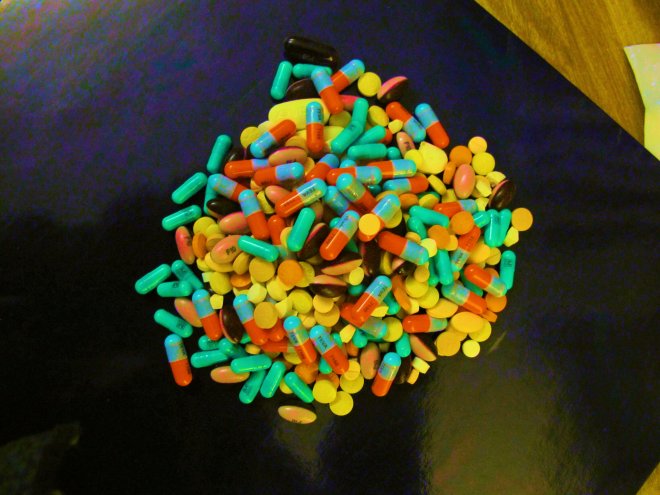 No matter how high I got there was always this core logic that remained. I may have been royally f-ed up but I wasn’t going to drive anywhere or play with matches or run through busy streets naked (maybe empty streets?) or try anything else really stupid. I expected things to get weird and rolled with it. And I didn’t do drugs if it wasn’t just free time where I could kick back and do nothing at all if I wanted.

Did you know that Dramamine is a poor man’s Thorazine? If I was tired of tripping, I’d take a Dramamine, fall asleep and wake up fine the next day. The ones you can dissolve under your tongue work the quickest. It didn’t happen often. Doses that left other people tripping all night long cleared out of my system in 3-4 hours.

I’ve had close calls but I didn’t freak out. I dealt with it. Roll with it.

There was a time when I was doing a strip-o-gram.  The lady who’d hired me for her friend’s birthday bash said she thought I looked nervous and offered me a “joint”. Within minutes I’d turned to rubber and was seeing streamers and trails and hallucinations while dancing/stumbling in nothing but chains for a group of drunken middle-aged women – with the birthday lady’s S&M oriented husband in the pack. The surpize was on me. The whole thing was planned. (You probably don’t want the sordid details.)

Turned out our “joint” was opiated Thai (without the stick) laced with PCP. It was my wildest trip ever from which only a few memories came through. I did not repeat that particular drug combo.

I suppose it could have been worse.

Another time I was at a really wild dance party in a hotel suite, (sci-fi convention) very late at night on a lot of MDMA (ecstasy). Of course, I was alone at the dance, just hoping. Story of most of my young life.

People seemed to like me better when i was high. The aspie-ness and insecurity faded. And sex was always incredible on pot. Like you were overdosing on raw pleasure. (You probably don’t want the sordid details.)

The thing about “e” is that you feel so damned good about yourself and the world, as well as feeling very sensual. All those Aspie panic buttons are turned off. Waves of pleasure cascade over you as your eyes start to wiggle (nystagmus) and your teeth start to chatter and your skin feels incredible. Not a particularly sexual drug tho. In stronger doses it can gives a guy a case of erectile dys and lets you get to the edge of orgasm but never quite over. (You probably don’t want the sordid details.). But you are feeling so euphoric and everybody seems so wonderful that you don’t care. The room was very hot already and then I started feeling very hot myself.

First, off came the clothes. That wasn’t enough. My skin was hot but I wasn’t sweating. “E” mucks with your thermo-regulatory system. Then I went out to the pool for a lone early am dip and that cooled me off.

My roomies locked me out, lauighing their asses off. I was so high I didn’t mind. I laughed too.

A decade later, I read about kids at raves on “e” who had danced until they died of hyperthermia. I don’t understand how they could not have noticed how hot they were getting, how it didn’t set off alarm bells. Maybe splashed themselves with cold water, went outside and took a breather. Maybe called 911 if that didn’t work. But when it comes to people there are many things I don’t understand.

It didn’t deter me.

MDMA was created in 1912 but didn’t become super popular until the 80s. That ruined it for the rest of us. The DEA scheduled it in 1985. By then, I’d joined the National Guard, got a job in aerospace and finally had a chance to settle down. Illegal drugs were incompatible with that lifestyle but more importantly, they had lost their attractiveness.

I survived the 60s/70s unscathed. There were those who didn’t.