In ancient Greek mythology, Sisyphus was condemned to push a rock up a hill and watch it fall again for all eternity. It is intended as an analogy to the life of a man who goes out every day and works so he can survive. Every day he works and yet he changes nothing of importance, so the next day he must go and work again. It is just as true in the 21st century as it was in 500 BCE.

This is the plight of the middle-aged salaryman or blue-collar worker. They have worked a lifetime only to discover that nothing of importance has changed. Unlike Sisyphus, man has an expiration date. The realization of the absurdity of all this is core to Albert Camus’ variation on Existentialist philosophy.

His argument is that life itself is absurd, regardless of who you are. By absurd, he

means that life has no inherent meaning and man’s quest for meaning outside of himself is what is absurd. Meaning can only come from within and it only holds meaning for the person who creates it. (Camus was obviously not into religion.)

Camus has his own answer. He also believes it is within human power to create personal, individual meaning for anything.

He envisions Sisyphus as happy when he pushes that rock uphill. Sisyphus has the clarity of mind and ability to accept the absurdity of the situation. He saves himself from madness by embracing the absurd. He takes ownership of his situation and makes that rock his own. Every day he gets that rock up the hill, it is his turn to flip his middle finger to the Gods. That is his meaning.

Make the struggle itself meaningful in your own heart and nothing the world can throw at you can phase you. It is but more struggle.

Some people need to struggle, like flowers need rain. I’m not one of them.

I have tried but cannot seem to find joy in yet another day of stress and pain. Camus’ suggestion that one can find meaning in endurance itself, regardless of the absurdity of the situation works for some but not for me. Indomitable will isn’t on my resume.

Doing something at the limit of your strength every day, only to see no change and having to do it again the next day is certainly an act of desperation. Doubly so if the biological clock is ticking and you haven’t had a chance to devote yourself to what you want along the way.

In his poem “Ulysses”, Tennyson has the ancient Greek king tiring of the mundane things 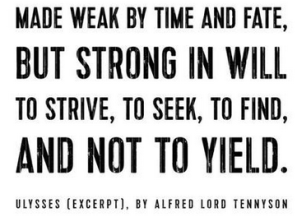 in life and dreaming of one final adventure. It is a common enough condition known as mid-life crisis. But it is by no means limited to the 40-plus crowd.

I have finally surrendered to the reality that I really am old and my bucket list needs to be dumped. More modest goals are required. Those goals have to be immediate because decreasing physical function will soon render them inviable and the bucket will have to be dumped once again.

First time I heard this I was a teenage boy. I was so stoned the room was flickering in orange and green and my body felt like bottled lightning.

Thoreau’s answer was to abandon the material things that tie you down. Simplify your life. The more things you own, the more they own you. Let that rock roll. Accept banishment from the rat race and find a quieter path.

There is much to be said for that. It is easy for many to find a kind of personal meaning in an absurd life from closeness to nature.

There are those of us who are unwilling to set off on adventures, simplistic, hedonistic or heroic. Locked by reality in a daily grind, the exigencies of maintaining life come to control us. To the extent that you value your relationships and your property, they also own you. The desire for security dominates the desire for freedom.

While you are busy owning things, don’t blame them for the ties you chose to accept. Own that decision as well. You will be happier for it.

I don’t have any answers. I try to simplify my life. My wife is a limiting factor on that, one that I am unwilling to discard. I’m great at doing things alone or taking trips alone but not so hot at long term living alone.

My adventures will be adventures of the possible, even as the possibilities narrow. They are still adventures, nonetheless. To push my limits, however limited they may be.

I have come to accept that life is absurd. That there is no meaning in it other than what we create for ourselves. To believe otherwise is merely to take on another person’s idea of meaning for your own. If it fits your disposition, fine. If it doesn’t, you’ll be in misery until you start to think for yourself.