A human being should be able to change a diaper, plan an invasion, butcher a hog, conn a ship, design a building, write a sonnet, balance accounts, build a wall, set a bone, comfort the dying, take orders, give orders, cooperate, act alone, solve equations, analyze a new problem, pitch manure, program a computer, cook a tasty meal, fight efficiently, die gallantly. Specialization is for insects.

I am a weed and proud of it. I am also a minor specialist in a few things.

The human equivalent of a weed is a jack of all trades. Could well also be an expert on something but no problem arises that leaves the person completely baffled.

Some mammals are more weedlike than others. Coyotes and rodents come to mind. Dingos and rabbits. The cockroach may be the supreme insect version of a weed.

Looking at it from an ecological point of view, we can call a plant that can survive under many conditions a weed. Other words for it are “ruderal” species and “pioneer” species. A plant that rules its own niche but nowhere else is a specialist.

Weeds rarely go extinct. Specialists often disappear in the event of a permanent change or a new competitor. Weeds have a very broad toolkit and can deal with whatever upset comes along. A fire burns everything to the ground. A drought kills everything in its wake. A flood washes everything away. A wind storm levels a forest. Insects eat everything in sight. Your lawn goes brown. If anything is still alive, it is the weeds.

Even if everything is dead and the ground barren, if life is at all still possible, the weeds will pop up. They’ll grow right out of a crack in a rock face. Then begins a process known as succession, where each step is replaced by a taller and more specialized step. Eventually, we get what is called a climax stage. This is where the existing plants create such a dense canopy smaller plants can’t compete. And there it stays in that state until another catastrophe comes along. Old growth forests in the American Pacific Northwest are an example. They can stay unchanged for thousands of years.

Economically speaking, an economy dominated by a few industrial and financial giants is a climax economy. (Hmmm…?)

Then along comes a fire or a hurricane or a clear cutting timber company. Or a war, plague or a famine. The weeds are still there. Seeds blown in from afar on parachutes, seeds from scattered local plants that somehow managed to survive. Seeds dropped by birds or carried on animal’s coats. Seeds that were fire resistant. Roots that disaster didn’t reach. The weeds sprout again and for a while thrive. Without those weeds to begin the process, the next step never has a chance.

The next time you see a dandelion forcing its way up into your lawn, have a little respect. You are looking at one of the world’s all-time great weeds. 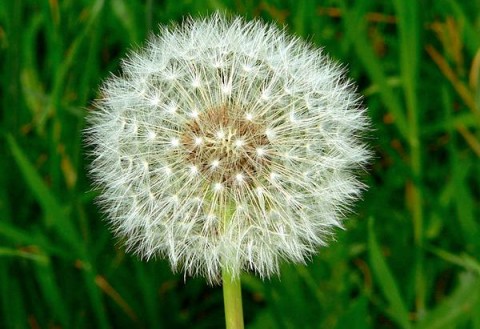