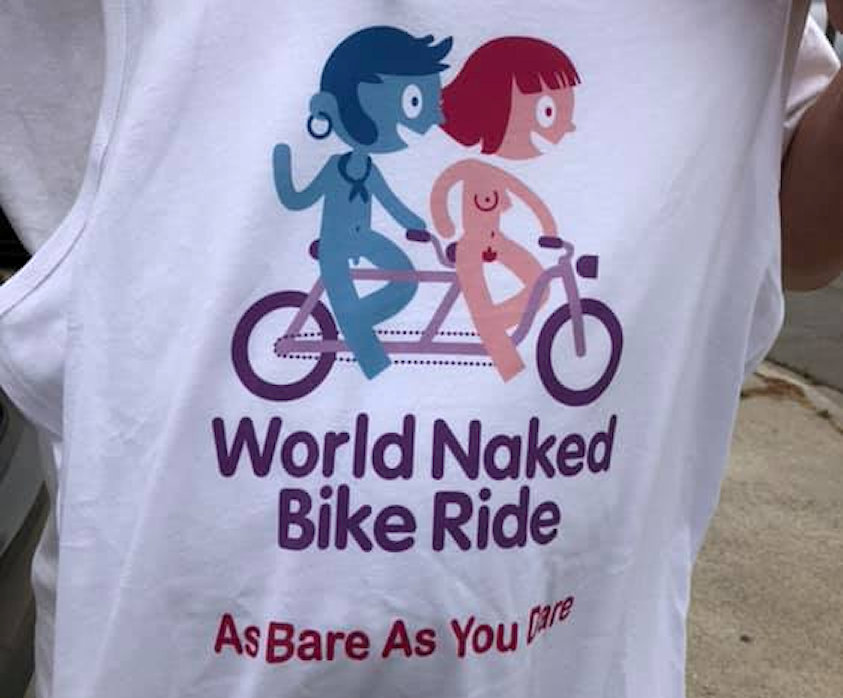 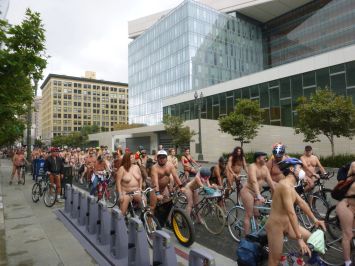 year there is this bike ride, the World Naked Bike Ride. It happens in cities across the world. Officially it is a protest against (fill in the blank). This year we demonstrated about carbon emissions, Guantanamo Bay, LGBTQ+ issues, body freedom and of course, bicycle safety awareness. The “rule” is to be “bare as you dare”.

This year in LA it was June 22nd, the day after World Naked Hiking day. About 400 people showed up.

Almost by accident, the City of LA never passed a law against nudity, (neither did the county) so here we can theoretically be bare. City (and County) Parks and Rec have their own rules. We are not welcome there. Yet.

There is a state law against lewd behavior. Back when CA was actually somewhat progressive, the state courts ruled that “nude is not lewd”. So unless you are getting aroused or trying to arouse someone else (admittedly a subjective call) you can’t be tried for a felony or as a sex offender no matter where in the state you are. That’s a big relief. Those places where simple nudity is illegal in CA are because of a local ordinance.

This doesn’t mean you can just disrobe and walk down Main Street at lunch hour and not be hassled. If (probably when) someone makes a complaint there are other ways to legally bedevil you, starting from simply ordering you to get dressed, to citing you for disturbing the peace, disorderly conduct, or causing a traffic hazard, to pulling you in for a nonjudicial mental health check. Charges will probably be dismissed but you’ve still been hassled.

But if you give notice – and make it a free speech issue – you can do it. If you have watched this blog for a while, you have a good idea of what is coming up next. NSFW stuff.

You see them popping up in many cities across the US. Chicago, San Francisco, Seattle, Denver Austin, and others. Not many in conservative areas tho. Freedom is revolutionary. 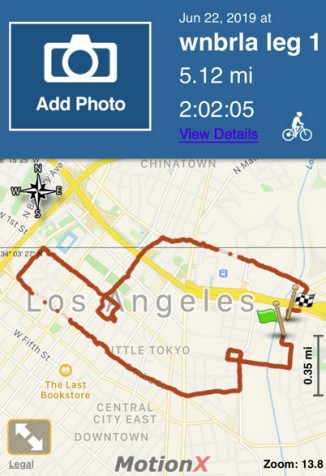 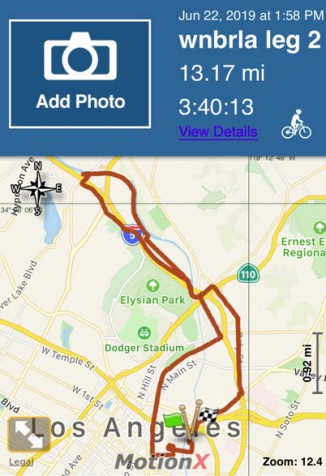 For today, my wife joined me on the ride and took photos. She kept her clothes on. It isn’t about making people get naked. It is about allowing people the freedom to be who they want to be and to dress as they please.

What is the point of this exercise in nonconformity? For one thing, a demonstration that such a thing can happen without the world collapsing. It didn’t, any more than it collapsed when gays won the right to marry or schools were integrated. Autos didn’t careen off the road as people looked either at us or away from us. Children did not run away screaming and traumatized.

Only a few dogs barked. OTOH, maybe a few parents were coaxed into discussions they

had been avoiding. Perhaps a good thing?

Another is desensitization. You’re driving down the street and see naked bicyclists. The next time you see something similar it will have less effect on you. Do it enough times and it would become unremarkable. And the police escort tells everyone it is legal. There is an almost universal assumption that is isn’t.

I would have a naked bike ride every week if I could. Eventually, open nudity would 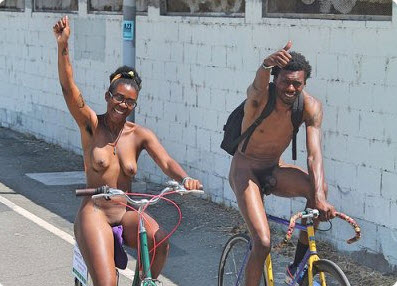 become a ho-hum thing. No big court cases, no painful struggle. Nudies could “win” and nobody would need to “lose”. It would become a fashion statement. (At least in LA. Burbank might take a lot longer.)

There is also a powerful element of self-actualization here. Why do we have gay pride parades? Hell, why have a St. Patrick Day parade? It is a political and social assertion of one’s existence. It is a celebration of ourselves. The Irish have long been deeply incorporated into society. Gays are a more recent addition to the fold and still not accepted in some areas. Nudies? Well, our path to acceptance and incorporation into the broader fabric of society has only begun.

Still, you gotta start somewhere. We need to celebrate being us and being ok. Not hiding in the closet.

Most riders do nothing to hide their identities. You’re going down major streets in the heart of LA and being covered by news crews. Pictures of you are almost certain to be plastered all over the internet. What if your friends see you? Which ones will you lose? What if your employer sees you? You could be fired. Your pastor? Your parents? How about that creepy guy next door? What might happen?

To be vulnerable is to take a risk. Bad things can happen. Unlike other groups, a nudie has no legal recourse against discrimination. 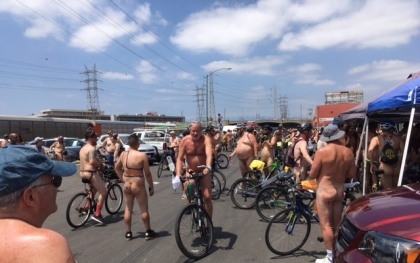 There were two runs. The morning ride was about 5+ miles and basically looped around downtown LA. We were about 400 strong.

The afternoon ride was 7 miles out to the Spoke Bicycle Cafe near Glassel Park and 6 miles back. Since most of the riders aren’t in particularly good bike riding shape, a lot of effort went into minimizing the hills that had to be traversed. Tough to do with the morning ride. Downtown LA has a lot of hills. Right and left turns and traffic lights slowed progress to about 5 mph. The slow speed and frequent stops made for a bit of frustration. 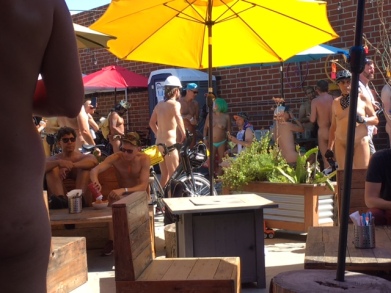 The cafe’s clientele didn’t jump up and leave when hundreds of nude riders showed up. However, there were a couple of small warning signs up and maybe the staff had mentioned it. About all I can say there.

The return was quicker. A couple of miles on the LA River bike path. Delicious afternoon breezes and intermittent shade. A short stint on Riverside and then straight down Mission. Lots of red lights but shorter and more direct. But I understand the circuitous route. You want to “show the flag” as much as you can in town.

I studied the responses in the public. It was mostly “OMG!” and laughter with a lot of horn honking. A few times at stoplights people asked us what the ride was for. I remember a woman with a couple of young children on the LA Bike path laughing and saying, “Wait until you tell Daddy what you saw today!” 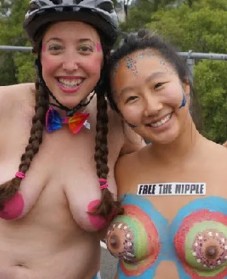 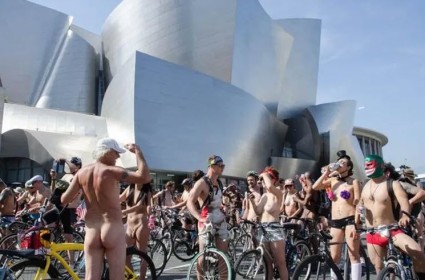 We ended up on all the local news stations. No negativity there.

I don’t consider amusement to be a negative reaction. Certainly not horn honks, nor shouts of encouragement nor thumbs up as people passed by nor videoing on their ubiquitous smartphones.

What I didn’t see was anyone vocally and obviously unhappy. Nor did I see anyone trying to cover their children’s eyes or distract them away. Now, it could well be that people who were displeased simply turned away or ignored it without a visible reaction.

My first ride, years ago, had a couple of hecklers and IIRC the very first LA Naked Bike Ride had an assault. (The first WNBR in Ojai was also the last due to angry negative reactions from the onlookers.) It isn’t always peaches and cream. Not all localities allow complete nudity and some rides call for hardy demonstrators up for an adventure. LA has become easy. The slow change over time towards acceptance is a sign of progress.

About half-past 5pm we finished up. 13 miles in 3.5 hours, including that stop at the cafe. Some of the fair-skinned riders were red from sunburn. (Summer solstice is probably the worst day of the year for that.) That’s a good argument for sunscreen but not for clothing.

But LA is not the only Naked Bike Ride out there. San Francisco has a Solstice Festival that is followed by a Naked bike Ride.

Other major cities across the US host their own. Like this ride in the Windy City.

The WNBR really is a worldwide event. This is a video from the WNBR Mexico City.

And of course, there were London and several other British communities.

As well as several other cities in Europe, Latin America, and the land down under. Not a lot of this in authoritarian regimes. Like I said above, freedom is revolutionary.

Whether we accomplish anything about getting off fossil fuels or manage to wake up people to the need to share the roads with bicycles is open to interpretation. From my POV, every time something like this happens, the door to body freedom and acceptance gets pried open just a tiny bit more. It is my hope that someday, probably beyond my life’s horizon, nudity will just be another fashion option and considered neither illegal nor perverse nor ridiculous.

In the meantime, it is a helluva lot of fun. 🙂

Due to the coronavirus outbreak, planning for the 2021 WNBR-LA has been suspended. The 2021 ride is still up in the air.