Another in a series of upcoming nudie events! It is springtime and that’s causing these things to pop up all over the place. Much like poppies. For the next couple of months, they will be dominating my life. I’ve also got Naked Gardening Day, Naked Hiking Day, a nude standup show at the Two Roads Theater, and a group trip to Saline Valley Hot Springs with a bunch of fellow nudists.

Knowing me, I’ll be off hiking alone in the middle of the night. Not to worry. I know I have to watch for rattlesnakes.

I’ll be safer there than driving to get there.

Ordinarily, being with crowds of people in noisy confused locations is my bête noire to the extreme.

This is different because I’m doing something that gives me great joy. The crowds aren’t that crowded and the noise isn’t all that loud. It spreads out and quiets down quickly. A common purpose of both showing off our individuality and making it to the finish line. No judgments. Lots of friendly people along the way and one’s state of dress doesn’t matter. There is confusion on a micro level but order on a macro level. I am engaged in a celebration of freedom and acceptance. High levels of adrenaline, only flooding with endorphins instead of cortisol. No panic attack here.

I’ve have been physically shut down for three months now. Months of 2 different illnesses and then a hernia surgery and going thru some deep depression. Getting back into any kind of shape has been painful and difficult. I’m hiking more, eating less and losing weight, trying for a tiny bit of tan. I am doing this so as to still be full of energy at the end of the course.

I’d much rather be preoccupied with this than to be mired in depression and self-doubt. I’ve been there and it is no fun.

From the Bay to Breakers site:

San Francisco’s Zappos.com Bay to Breakers is the oldest consecutively run annual footrace in the world, a staple to the City by the Bay since May 1912. With a starting point near the San Francisco Bay, a few blocks from The Embarcadero, the 12K race runs west through the city and finishes at the Great Highway where breakers crash onto the Pacific Coast’s Ocean Beach. A quintessential San Francisco experience for 103 years, the race is interwoven into the fabric of the city and is a true reflection and celebration of life between the breakers and the Bay

What it doesn’t mention is that a number of people do the run/walk au naturel. And it is 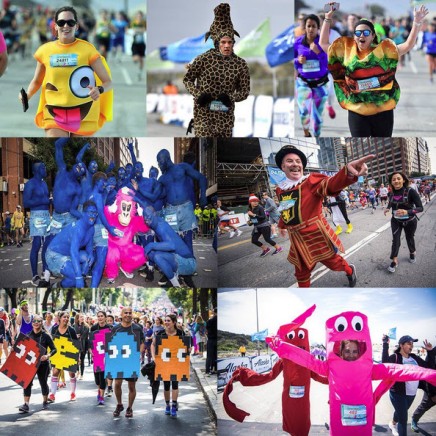 perfectly legal. There is a city ordinance prohibiting nudity but it exempts things like festivals, parades, and political speech – so off it goes.

Wife and I visit my sister-in-law the day before. We trek over to the BART station and head for the Embarcadero. I slip into a “corral” (an area specifically set aside for people who expect to walk/run at a particular speed) and out of my clothes. My co-conspirators head to a location a half mile up or so. I hand them my clothes as I go by and they cheer me on and take photos.

If you aren’t as lucky as I and have friends/family as co-conspirators, Lupin Lodge has about the best deal out there for camping that weekend and transport to and from. Call Lupin at 1-408-353-9200 (Not a paid ad.)

The hats are a real thing. The nude participants started in 1986 with one guy. (Will Streaker, of all names!) In the 90s, other people joined in. An organization was formed and hats were made up. (You can still get them here but the hats can only be ordered in

April.) A legal defense fund was even set up.

I lost mine long ago, so for 2017 so I made up my own. Bought another one for 2018. A hat isn’t really needed. I just prefer to keep the sun from my eyes and I like the message.

In the past, the group would have a big pre-race meeting, then go to the route and enter in as one big clump of 400 naked people.  Not so today. If you aren’t part of your own group, it is every person for themself. In the early 2000s, one time there a some conflict with police who picked up a few nudies at the very end of the race because an anonymous “someone” was pressuring the Police Commish to “do something”. The judge threw those cases out and that has been that.

I’m not completely naked for the race. I have my hat, my footwear and a tiny transparent pack containing a pair of shorts with ID and some money in the pocket. (It has to be transparent for the police to inspect to make sure there’s no obvious alcohol or pot.) If you pay the money to get into a corral, you can get a runner’s bib with a number and a chip to record your time and get you identified in photos taken at the finish. I was just too tired for photos last year.

There is a huge prerace event on the Embarcadero where you can pick your racing bib  up if you don’t have it mailed to you. MUCH too loud for me and too many vendors asking me to spend money. Some people like that sort of thing.

There used to be cameras atop Hayes Hill to take photos at the halfway mark so you could order pictures later. The computer can read the bib number so it is easy to find. They didn’t do that in 2018.

If you are cheap, you head a couple miles from the start and then step out when the crowd walks by. It is frowned upon to step out into a group of people who are actually running. It will get you unceremoniously ejected.

“Running” can be a figure of speech. Most walk. Even those who start in the faster corrals usually end up walking. (People tend to be over-optimistic about their abilities.) The rear is brought up by centipedes and families with strollers. I like to start in the 11-minute-mile pace group. When I get tired, I can move to the side and let the parade pass me by. Say I started with the 14-minute-mile-group and stayed at that pace.  I would miss all the interesting people went after me and many of the people who started ahead of me. It is more entertaining to start a bit ahead and slow a bit to see the entire parade go by

In the Bare to Breakers you are often a lone nude in a sea of costumes. There are anywhere from 40 to 80 thousand participants, depending on weather, and another 70-100 thousand spectators. A vastly smaller number of nudies scattered over the 7-mile course. At first, a few tourists will be surprised and amused to see a nude dude. Some will want pictures taken with you.

One in a hundred will frown, look away, or complain about not wanting to see dicks, just

chicks. Not the usual response. Everyone knows to expect nudes. It’s been happening for 23 years. It doesn’t stop people from attending and plenty of families come. There’s a whole corral just for them.

By mile 2 everyone is equal. Naked is just another fashion choice. Nobody cares. After people have seen a few nudies, the shock and taboo are gone. By mile 3, if you are open to it, you’re talking to and walking with those around you without any self-consciousness.

It takes longer for nervousness over your own uniqueness to wear off than it does for the people around you. And then, if you are very very fortunate, you forget you are naked.

There is something extraordinarily liberating about this. Being freely unique in your own special way. Accepted as just another human being as an individual and not having that uniqueness held against you.

Isn’t that what every person wants? To be the individual they are, to have their uniqueness accepted – even appreciated?  To still belong with everyone else without all the pettiness, the “this that or the other thing” shaming, and nasty tribalism getting in the way?

Now you have found your way to true diversity.

Just a bit of fun!  I did a lot of streaking in a very rural town in the midwest.

Thanks to the COVID-19 outbreak, the 2020 Bay to Breakers has been postponed until September 20. Since the B2B was a community’s response to the Great Earthquake I think it proper that the event goes on eventually as a response to the epidemic as well.

Please feel free to like and comment! Here are some other Bare to Breakers posts by me.