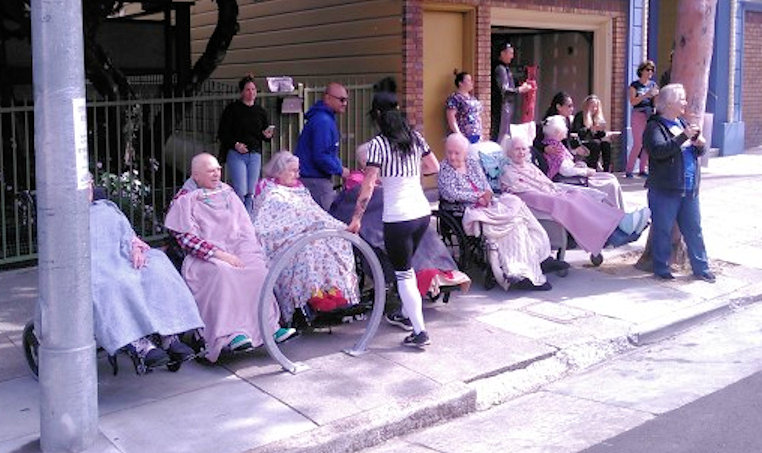 That was the walk that was!

I almost didn’t do it this year. The day before our flight to San Jose I spilled boiling water on my left foot. That left a nasty blister the size of a silver dollar which of course popped the minute I put socks on. But I coated the wound thickly with Neosporin and covered it with a 3-inch wide Band-aid and the problem was solved. Never hurt again, not even a little bit.

We had another reduced crowd this year. Only 40K registered with an unknown number just joining in along the way. About 125K spectators lined the way. Total nudies were in the 40-50 range, maybe half of last year’s. No doubt the cold weather had something to do with that.

Starting temperature was in the low 50s with cloudy skies, wind from the west at 10-15

mph and a high humidity. This was the coldest B2B I’ve ever participated in. Taking one’s shoes and pants off and then replacing the shoes took a bit longer than I thought it would. Had to wait maybe 20 minutes in the cold and that is a very interesting experience when you are nude. Everything was delayed by maybe 10 minutes, so we finally started at about 8:50.  Next year, a warmer temporary coverup solution.

I stopped to say hello to my wife and sister-in-law who were waiting for me about 2 blocks from the race start and handed them my excess clothes. I was instantly swarmed by people wanting their picture with me.

As we headed inland and the sun got higher, it warmed up a few degrees but it never broke 60. I still managed a slight sunburn on the top of my shoulders, nothing to complain about really. One thing I noticed was that even with the wind and cold I was sweating while I moved. We were told we had to carry transparent plastic backpacks. The plastic is completely nonbreathable which meant my back was completely covered in sweat which then ran down my back onto my buttocks and legs. It was cold and it tickled. Next year, a better backpack solution.

Of course, there were the usual crazy costumes.

Shots from within corral F, my camera. 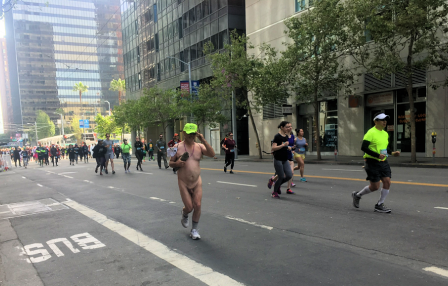 Not my wife… she’s taking the picture!

Stopped to hand my unwanted clothing to my wife and I am accosted by people wanting their photograph taken with me.

Up and over the Hayes Street Hill and then down the park to the ocean. The temperatures dropped again and the wind picked up. I took the option for the full 15K. My official time for the course was 2:57.  I think that comes out at a 17-minute pace for a mile. Except…!

I saw a sign that indicated I should turn left. There were very few people going straight and a large number of people turning left at that point so I turned left. A few blocks later I was into a residential area, still surrounded by B2Bers. Even passed a police officer.  But it seemed strange and I couldn’t put my finger on it until I saw cross traffic and realized there was no traffic control here. And pedestrians stopping for a red light. I was obviously no longer on the course, yet nobody seemed to care that this naked guy was wandering through their neighborhood. So I asked and was told I’d turned left too early.  I went back and followed the other route, the one with no people on it.

It was almost empty. Only a small number of people were actually taking the extra 3k on the route. The people I’d been following were heading off into dispersed parking over a large area. So I did the 3K and finished.

Once across the finish line, the festival was right there on the pavement. Previous festivals had been large rock concerts featuring big-name performers on the grass in the park. This festival was just a couple lines of tents selling food and handing out shirts, water, beer, and medals. OTOH there was no pressure to get dressed. Previous “Footstock” festivals in the park had required attendees to be clothed. I collected my medals and my shirt and headed to the waiting shuttle bus to return to the Embarcadero. The lines for the photo booth and the free beer were longer than I was willing to wait in.

If you plan to register, do it at the earliest opportunity. As I remember, it opened on midnight, Oct. 31st for a very low rate for that day only.

The best deal for a room was to spend the weekend at Lupin Lodge.  They had a shuttle bus to and from the event.

While there were as many spectators, there were a lot fewer participants than I am used to. That may just be the weather. I think it is also a matter of sponsorship. Originally the SF Herald-Examiner encouraged the nudies. Nike even had a billboard with PG-rated nude runners on it saying, “Just do it!”

After they  went on hard times, the city has been scrambling for sponsors. Registration itself has gotten expensive, especially if you don’t get the early bird deal. There is a massive effort at merchandising. Nobody is pushing the nude thing.

Nudies were far fewer in number this time. Again, I figure the weather had a big impact. But there weren’t that many a year ago, either. When I started doing this it was in the hundreds and now it is down to less than 50. Obviously, I didn’t see everyone but I only saw one nude female and four topfree females. It saddens me to so so few people willing to step up for body freedom.

There were no ill comments or nervous looks that I was aware of. Not even when I was a quarter mile off course in the residential area. OTOH I got a lot of “attaboys”, and thumbs up, and “I wish I had the courage to do that” statements. I’m sure there was someone out there who was unhappy. Must have kept quiet about it.

I still intend to be back again next year and every year after that until I can’t walk the distance or they reenact complete prohibition. I hope to have trimmed a bit off my belly, be in better shape, and not have so many foot problems. I am lucky that my wife and I are able to stay at her sister’s place in San Jose. Hopefully, they will have extended the BART line out to San Jose Airport. It would make my life a lot easier.

Thanks to the COVID-19 outbreak, the 2020 Bay to Breakers has been postponed until September 20. Since the B2B was a community’s response to the Great Earthquake I think it proper that the event goes on eventually as a response to the epidemic as well.

Here is the SF Gate’s coverage of the event.

A Lazy Day on the Pacific Crest Trail

Be there or be square!